AznSensei here reviewing the recent Level Up Collection Set released in The Sims 3 Store. This Set includes   a small number of 10 items, but costs 1250 Simpoints (Original Price 1600 Simpoints). It is on sale until 9/20/12 *Midnight PST*

Taking note, there are technically "3" Premium Content Objects found in this set. The main 2 are the following:

Basically, this Throw Machine has two interactions and 1 new moodlet: Burnin' Up The Hoops 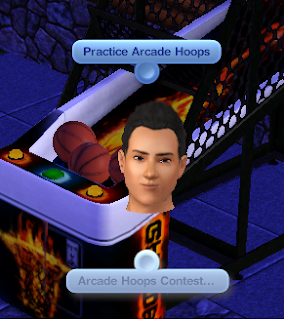 In order to access the Arcade Homes Contest, you must have another Throw Machine next to it. When playing in a contest, both sims will be throwing balls to get a higher score, along with gaining the athletic skill. There is no new skill with this new item. When the person wins, the lights in front of them will flash and both players will clap and applause. The Moodlet has a chance of appearing, but so far it hasn't appeared for me. 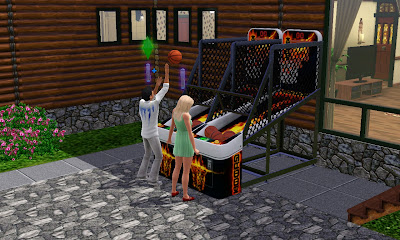 Unlike the Throw Machine, this object comes with "2" more moodlets (along with the previous one with the throw machine), total of 3 new moodlets:

- King of the Court
- Rim Wrecker

The interactions involved are also shown below: 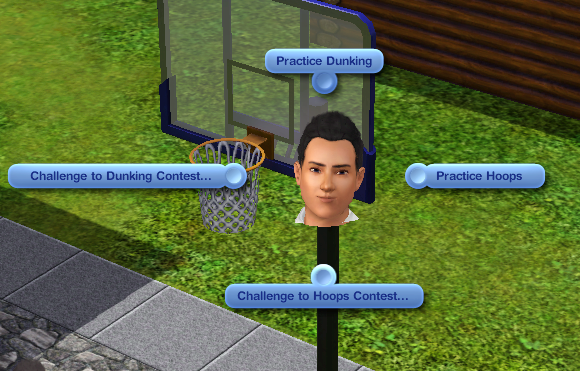 The Practice Dunking and Practice Hoops are pretty much the same as working out. However, dunking will involve a sim attempting to jump and dunk the ball into the goal mid-air while hoops is for throwing from the ground. Your sims can fail at dunking though!

Here are some images of Dunking: 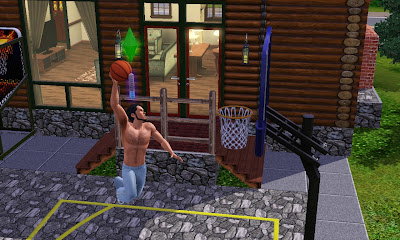 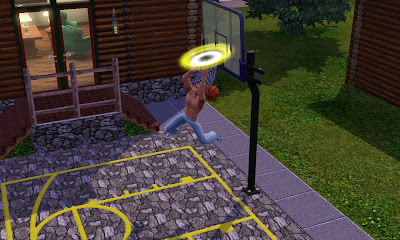 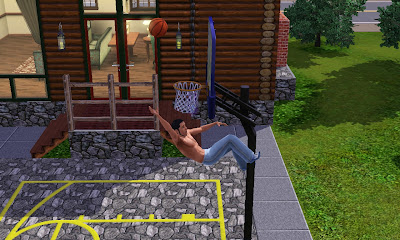 When practicing hoops, there may be some chance that your sim will throw a really fast one, showing a fire basketball animation. Sadly I could not reproduce the flaming ball yet so I'll update when I can. 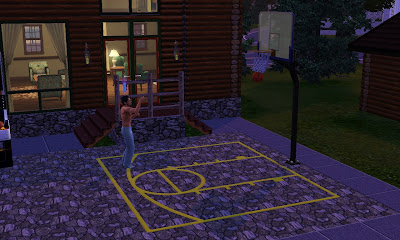 You can also challenge your housemates or other sims in your lot to a Dunking or Hoops Contest. However, that is all you can do. Taking turns dunking or throwing hoops is their form of  "contest".

Sadly, I do wish there was more interactions for this Basketball Hoop, such as having a one-on-one actual basketball game where one player has the ball, the other tries to get the ball from them and block them from shooting. Another idea was to connect two basketball goals and have a group of 4+ Simmers form a team and having a game of one team against another in order to win. There are many things the Store Team could have done, but alas it's just a goal.

Other 7 Items included are:

All of this for the price of 1250/1600 Simpoints. Now the question is, is it worth it? Well if you consider that you are getting pretty much 3 PC Objects, totalling at around 1300 Simpoints, then you are pretty much getting the rest of the content for free when purchasing the set. Since Premium Content has been priced at 400-500 Simpoints each this past year, I think it would be worth getting some of the extra stuff, as they are nice too have also ^_^

Overall basically the review of the entire set is as follows:

Price: 9/10- Some of the items are not worth the price such as the sectional sofa for 200 simpoints, but other than that the price seems pretty reasonable when purchasing as a set. You get 2 PC Items, and one clone of a previous PC Item included.

Theme: 10/10- I do enjoy a new set that isn't focused on modern clothing or world styles, and a sports-themed set hasn't been made a while. Props for the idea of adding this theme this week.

Design: 7/10- I do wish that a Basketball Hidden Skill or actual skill was included, much like how the Casino Items give the Gambling Skill. Although, the athletic skill is good enough for me as it's normally used for all sorts of sports activities. The Basketball Goal does seem a bit disappointing because there's nothing really interesting about it or anything fun to it. Earlier, I suggested some other functional gameplay like having 4+ players play against each other in teams to win a game, or having a one-on-one actual game on the basketball hoop.

Overall: 8.7/10 This set was small and another set should have been released alongside this one, but other than that I'm pretty much happy with the price and the content that comes with it. Now Schools and homes will have Basketball Goals to have outside, new decor for the outdoors. ;)