Anyways, this new addition to the store adds on to the previously created Japanese Inspired Sets released last year around this time and almost completes the set. All that's left is having a Kitchen Set. This set comes with 21 items, including a brand new Premium Content exclusive to this set for a couple weeks/months until available for individual sale.

Pricing wise, there HAS been a "small" increase in the price (not a dramatic one) for some particular items as I have counted 9 items out of 21 to be 110 Simpoints each. No clue whether it was intended or a type or not, but honestly a 10 simpoint price for "MY" wallet won't hurt me anything, but I don't know about others. Also, since the original price of the set is 1400 Simpoints, one will only be saving 150 Simpoints more from the original price in this case.

Anyways, the cost of all the items total is 2015 Simpoints. However, purchasing this set until the 15th of November makes the cost almost half the price, at 1250 Simpoints. So there is some nice savings with this set.

Moving on back to the Premium Content, the PC Item included is called the Chun Co. Teppanyaki Grill. This new Premium Content item introduces a whole bunch of new recipes for your sims to enjoy AT HOME or even at a community lot (which is a definite plus with having more food options outside of the home).

This grill comes with 4 different options: 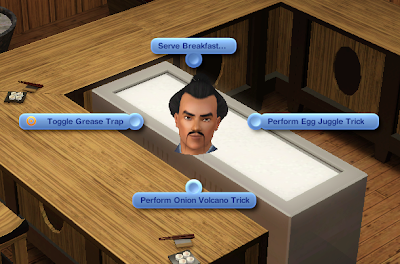 The final option, if it becomes dirty is the Clean Up option, just to keep note.

When building with this particular object, one will notice that it will look like it would not fit with the island counters around it and everything like the picture below: 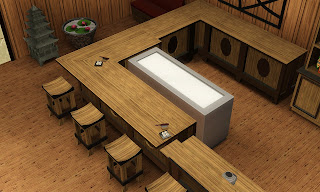 However, with the "Toggle Grease Trap" option, one can turn on the grease tops, making it fit with the island counters as shown below, one nifty feature with this grill when building WITHOUT using the MOO cheat. 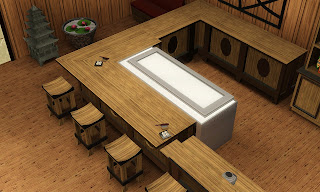 What is also added to this object is when your sim performs one of the three interactions, they will change into a chef outfit tied to the grill itself and make it seem as if they are a culinary professor. 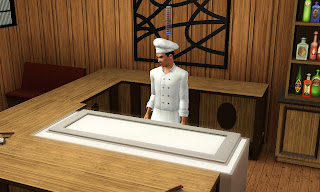 Unfortunately, there is no NPC tied to this object, so some will be disappointed but mostly because there has been no NPC functioning Premium Content released in the store as most of the time they are found related to Expansion Packs such as Late Night with the Bartenders, Ambitions and World Adventures with the Registers, Pets with the Pet Store, and the Proprietors in Showtime. "Hopefully" we may see some NPC owned Premium Content, but honestly I'd prefer it comes in an Expansion Pack just to prevent any bugs from happening.

There are new Recipes that come with this Grill that will for sure make those who enjoy cooking new dishes in The Sims 3 very happy! These recipes include the following:

When performing the Egg Juggle or Onion Volcano tricks, your sims has a chance of succeeding or not and it will vary most likely depending on your cooking level, or it may not have any effect at all. Performing these interactions will also increase your cooking skill besides cooking the food.

WARNING: The Onion Trick will have a chance of burning your sims too! 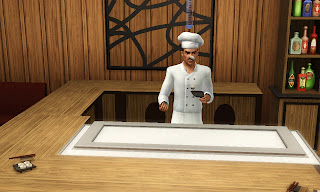 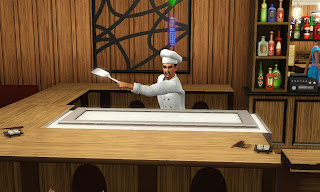 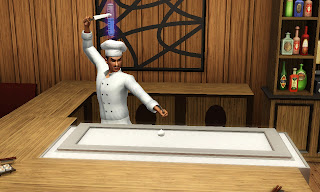 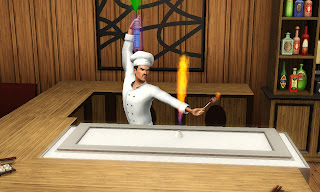 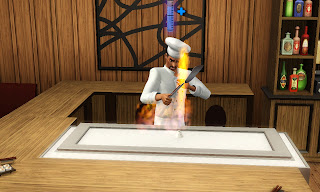 Below are the pictures of the tricks, both successful and failure.

Included in this set besides the Teppanyaki Grill are a bunch of new decorative items for your dining room, including a counter and counter island. Below are the pictures of the other items, including additional stencils.

Also, included that is introduced for the first time in this set is a BRAND NEW Half-Wall design from the Store Team. It is known as the Rice Paper Wall. One other must have item when building Asian-themed Restaurants or Homes, or even a community lot of any sort.

Price: 8/10- When the store content is normally expensive when buying in individual items, buying this as a set is a pretty much a decent deal. With individual items totaling 2015 Simpoints, buying it for 1250 Simpoints is a definite bonus. Although one can just wait for the price to drop even more at a later time since the original price of the set is 1400 Simpoints. I didn't give this a 9/10 or even a 10/10 due to the fact that some objects do cost 110 Simpoints. However, since I just bought this as a set, the 90 extra simpoints have no value/meaning to how much I'm paying for this set, 1250 Simpoints.

Theme: 10/10- I am a HUGE Asian-oriented player, being Asian myself of course. Having this type of content pretty much excites me as I normally live in a traditional American-styled home with not that many Asian furniture or design. Being able to build this in The Sims 3 is a nice touch and also adds on more to the previous Japanese Sets we have. I'm in dire hopes that a kitchen set will soon be created next month or so.

Design: 9/10- When it comes to the design of these objects, some of them fit the traditional Japanese-styled restaurant, along with the nice new ceiling wall hanging decor included in this set, plus the new half-wall for the first time in The Sims 3 Store. One thing I did wish for was another wall light and floor light, which will help decorate the dining hall on the walls, or even on the front entrance leading into the restaurant. The Kyoto Light surely depicts what one would find in an Industrial Kitchen so I hope this is a hint for more Industrial Kitchen objects.

Premium Content: 8/10- While this content does not come with an NPC, it would have gotten a 10/10 for the Store Team to go way beyond their limits and introduce an NPC running this grill. While it would take a whole bunch of coding involving Story Progression, Earning Simoleons, and creating an NPC and tieing it to this grill, I do appreciate the effort and the capabilities this grill has to offer and definitely pleased with this object. Sure I'm disappointed in this grill not having an NPC like anyone else, but this object is for sure a still good one to have, especially with all those recipes! Plus, I won't have to worry about a Simbot running this grill like the Blackjack table and actually have my sims cook something new for once. The grease traps also make this object fit so perfectly well!

Total Rating: 8.75/10- I have nothing else to say about this set other than it definitely suits my taste, adds more culinary asian cuisine to my recipes, along with some new gameplay and storytelling experiences. I have already built a Hangout, a Fusion Lounge, and also a Stay-At-Home Restaurant with this set and I plan on doing more with this set. This is a wonderful edition to other community lots and at homes too! It is both entertaining and fun and I was not disappointed with the price I'm paying, especially when I plan on using all of the items.